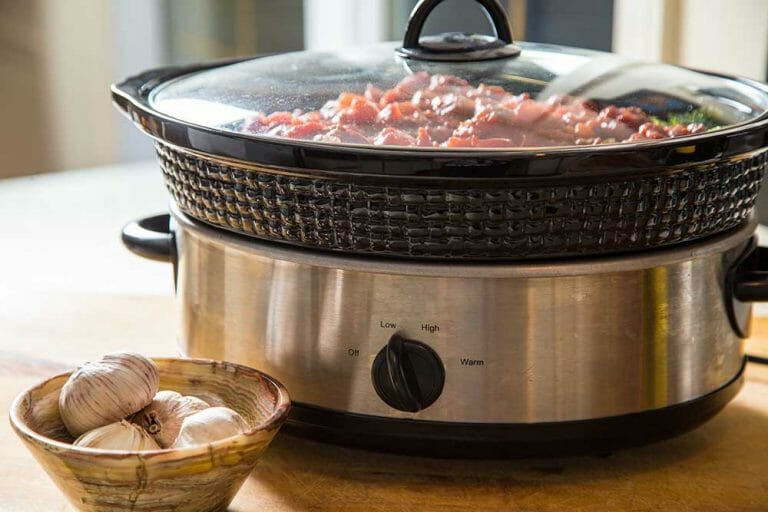 Do you have to put water in a crockpot?

The slow cooker is also known as crockpot is a countertop electrical cooking appliance is used to simmer and cook for at a lower cooking temperature compared to other cooking methods, slow cookers are great but it is important not to make mistakes while using it could be a total disaster which is why there as been a common question of how much water to add to a slow cooker.

If you are a huge fan of slow cookers then there are simple cooking methods that give you better and efficient working crockpot and this is even more important when your slow cooker is being used for lots of recipes.

Slow cookers are fantastic ways to make tasty meals without taking much of your time and you can easily come back from work to a tasty hot meal.

Many recipes require lots to no liquid when cooking but this is not the case with a slow cooker as it uses low heat to simmer and cooks really slowly which means you don’t want to have excess water in it.

The amount of water to be used in a slow cooker is a question that does elicit heated debates and if you buying a slow cooker for the first time or can’t seem to understand the water quantity needed by your crockpot, read on to find out why and how much liquid is too much.

How a slow cooker uses liquids

Your slow cooker can be your best friend but first, you have to know how it works and after setting up your slow cooker, next is to understand how liquid works in it for a more efficient job.

Manufactures always design a slow cooker with the lid and it is recommended to keep the lid on throughout the cooking process, as the food cooks, the vacuum seal is created between the lid and the vessel which traps liquid in and in turn uses it to slowly cook your food.

How Much Water Should You Add To A Slow Cooker?

How much water you use in slow cooker depends generally on the recipe, read the recipe for each meal properly so you do not make mistake and pour water in the base of your slow cooker and also some recipes call for water to be added to the ingredients which would allow it gain volume and boil or cook better, some of these foods include soup, sauces, stews and many more.

A small amount of water is needed to kick things off in a slow cooker and unless you are making stew or soup, you should limit the liquid you put in the slow cooker.

If you are trying out a new recipe and not sure how much liquid is required then it’s best to keep liquid at a minimum and keep topping as it cooks, this will allow you monitor how much water it needs and won’t end up with a mushy tasteless food.

What happens if you overfill a slow cooker?

Two things are likely to happen if you overfill your crockpot, first which is the possibility of your food not cooking evenly or thoroughly and secondly, the food is likely to end up looking messy and unappetizing.

The best option will be to fill the cooker with about two-thirds of the way up and you are good to go.

Can you dry cook in a slow cooker?

Meats like pork fillet, chicken breasts, fillet steaks and other tender cut meat don’t turn out well when dry cooked and could rather dry out.

The use of liquid in a slow cooker is not exactly necessary, it, however, adds flavour to your food and if the recipe you are making requires it then it should be used according to the requirement, you can use it in moderation to properly cook your food and make sure it has enough steam.

You don’t always have to use water when cooking as well, you can get creative and go for broth or some alcohol but to used with care, this can enhance your food flavour and make it tastier.